The Black Death (bubonic plague) that devastated 1300s Europe had its origins in Asia and devastated much of Asia prior to its appearance in Europe.

Jack Weatherford in his book, Genghis Khan and the Making of the Modern World, pieces together the story of the Bubonic Plague and its origins in the Mongol Empire:

According to the most plausible, but not completely verifiable, accounts, the disease originated in the south of China, and Mongol warriors brought it north with them. The plague bacterium lives in fleas, which traveled on rats transported in shipments of food or other tribute taken from the south. Although the fleas do not normally infect humans and the smell of horses repels them, they can live in sacks of grain, human clothing, and other places in the vicinity of humans while awaiting their chance to jump on them. Once the infected fleas arrived in the Gobi, they easily found hospitable new homes in marmot burrows and the extensive rodent colonies, where they have lived ever since.
On the open steppe of Mongolia, the plague remained just as virulent, but it posed less danger in the sparsely inhabited environment. Even today, it kills a handful of victims every year in the summer, but the small population living among so many horses and the lack of fleas in the Mongol dwellings tend to keep the disease from becoming an epidemic. By contrast, in the densely inhabited urban areas of China, and later in other urban areas, the disease found its perfect environment in the rat populations that had lived in close proximity with humans for so long that no one suspected them as sources for the disease.

By the 1300s, the Mongol Empire extended across Asia and into Eastern Europe. The Mongols were the ultimate free traders and earned their wealth by transporting goods across their empire. They were accepted as rulers because they could bring goods and wealth that were otherwise not available (and opposing them could be a death sentence). Like our current global economy, large volumes of trade goods were moved. Just like today, invasive species including bacteria, fleas and rats are transported along with the trade goods.

Transport of diseases can create new associations that can produce devastating effects. When disease organisms first jump from one species to another, they are often virulent but become less virulent as generations pass. The most virulent strains of the disease kill hosts too rapidly and suffer from reduced transmission. Thus, the less virulent strains produce more progeny and come to dominate the population. The most susceptible hosts die and the next generation is produced by the most resistant parents. Thus, new diseases for a population often evolve to an accommodation. Diseases evolve that are less virulent. Hosts evolve that are more tolerant.

In 1331, in what is now Hopei Province in China, it is estimated that perhaps 90 percent of the population died of unknown plague. This was accompanied by a the rapid turnover in leadership of the Mongol ruling family. Had trading moved exotic species of disease in contact with previously isolated hosts to produce a hitherto unknown disease and pandemic? Possibilities include movements of exotic species of rodents, exotic species of fleas, exotic strains of disease or some combination of all three.

By 1300, trading caravans had shifted from a southern route across Asia to a more northern route that took the caravans through a desert area that is home to a wide diversity of rodent species that harbor a wide diversity of flea species. Trade could have brought these populations of rodents and fleas into contact with Yersinia pestis, leading to the creation of a new biovar. The Black Death of the 1300s had the characteristic of pneumonic transmission from human to human, not associated with other biovars. Yersinia pestis, is still present in the marmot populations of Asia and is responsible for a dozen death each year.

Evidence from more modern outbreaks of plague suggest that invasive species have an important effect. A recent study in Uganda associates a recent invasion (transported by human trade) of the Brown rat Rattus rattus, with plague. In the United States, Yersinia pestis, is present in rodent population of the desert southwest. The plague was likely transported to North America by accompanying trade goods.

Since the Black Death of the 1300s, there has been one subsequent bubonic plague pandemic that dates to 1855. This plague killed more than 12 million in India and China. It was during this pandemic that Alexandre Yersin identified the bacterial pathogen in 1894 and Paul-Louis Simond demonstrated that the Oriental Rat Flea was a vector 1898.

Recent efforts to combat plague focus on controlling rodent populations and especially rodents that live in close contact with humans. Rodent control must be accompanied by simultaneous flea control. Killing rodents could encourage fleas to leave the dying rats and spread the disease to people. 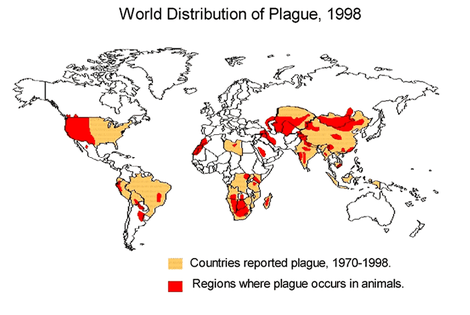 World_distribution_of_plague_1998
US Center for Disease Control

Jonathan Neal is an Associate Professor of Entomology at Purdue University and author of the textbook, Living With Insects (2010). This blog is a forum to communicate about the intersection of insects with people and policy. This is a personal blog. The opinions and materials posted here are those of the author and are in no way connected with those of my employer.
View all posts by jjneal →
This entry was posted in Health, Invasive Species, Pest Management, Policy. Bookmark the permalink.