I recently posted about mind altering fungi and viruses that turn ants and caterpillars into “Zombies”. This story is about wasps that turn spiders into zombies.

We usually think of spiders capturing and killing insects. However, many wasps feed on spiders either as predators or parasitoids. In a recent article in the journal, PLoSOne Czech scientists Stanislav Korenko and Stano Pekár describe the mind altering behavior that occurs in spiders that become hosts to a parasitoid wasp.

A female parasitoid wasp, Zatypota percontatoria, will find a spider and inject an egg into the spider abdomen, all the while avoiding entanglement in the web. This wasp species will attack several related species of wasp with slightly different “zombie” effects. The egg hatches inside the spider and the larva feeds on the internal fluids of the spider (like the movie, ‘Alien’). When the larva is ready to emerge from the inside of the spider, the spider will stop behaving normally and exhibit ‘zombie’ behavior. The (Zombie) spider greatly modifies its web and builds a protective structure that is used by the wasp larva. Korenko and Pekár are studying this interaction to learn how the wasp manipulates the behavior of the spider.

One hypothesis is that the larvae release a hormone or neuromodulator that activates innate behavior patterns in the spider. The zombie spider species, Neottiura bimaculata, produces a dense web. The zombie spider species, Theridion varians, produces a ‘cupola-like’ structure. Typically, Neottiura bimaculata, only produces a dense web around themselves and their egg sac as an overwintering structure. Theridion varians, constructs a similar cupola structure only for spending the winter. When under the control of the parasitoid wasp, the zombie spiders make overwintering structures in the middle of the summer.

The authors conclude that the wasp is not creating new behaviors in the zombie spiders. Instead, the wasps trigger innate behaviors of the spider that happen to benefit the wasp. These zombie spider structures will protect the wasp as the larva emerges from inside the spider to consume the spider remnants and form a pupa. Turning the spiders into zombies has clear protective benefits for the wasp. Becoming zombies does not affect the outcome for the spiders. They will not survive the wasp attack whether or not they become zombies. 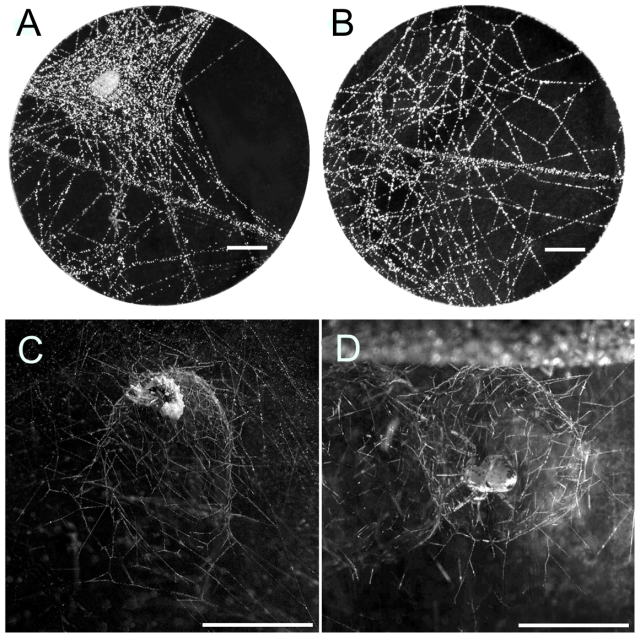 (A) Zombie web and (B) typical web for N. bimaculata.
(C) Zombie web and (D) overwintering web for T. varians.
The wasp larvae can be seen in (A) and (C).
Photos: Stanislav Korenko and Stano Pekár; PLoSOne

Jonathan Neal is a retired Associate Professor of Entomology at Purdue University and author of the textbook, Living With Insects (2010). This blog is a forum to communicate about the intersection of insects with people and policy. This is a personal blog. The opinions and materials posted here are those of the author and are in no way connected with those of my employer.
View all posts by jjneal →
This entry was posted in behavior, Environment. Bookmark the permalink.

7 Responses to Living With Zombie Spiders