Natural products produced by insects have a broad range of uses both currently and historically. Two insect products, beeswax and shellac were instrumental in the development of the phonograph and record technology.

Sound recording was first invented in the 1850s and the phonograph invented in 1877. The early phonographs used cylinders made of mixtures of paraffin and bees wax for music recording. Bees wax is secreted by worker bees as scales on their abdomen. The bees chew the wax and use it to build comb to store their honey and rear their brood. The comb can be harvested and melted into a wax that in this case was used to make the original wax phonograph cylinders. The bees wax and paraffin mixtures were replaced by the harder carnauba wax in 1890.

The original wax cylinders could only record about 2 minutes of sound. They eventually had competition from disks that could record over 4 minutes of music. The original disks were made of hard rubber, but by 1895, disks composed of a variety of materials held together by shellac came to dominate the market. Shellac is made from secretions of the lac insect, primarily Kerria lacca, in India. Incremental improvements were made to shellac records that greatly improved sound quality. The finest records required the highest quality shellac. Britain controlled India and thus access to shellac. British shellac records were some of the finest quality. 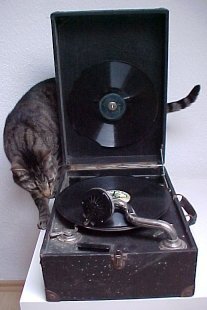 Today, music is digital and stored in a variety of other formats. First, bees wax and then shellac were important insect bio-materials that contributed to the development of recorded sound and the music industry.

Jonathan Neal is an Associate Professor of Entomology at Purdue University and author of the textbook, Living With Insects (2010). This blog is a forum to communicate about the intersection of insects with people and policy. This is a personal blog. The opinions and materials posted here are those of the author and are in no way connected with those of my employer.
View all posts by jjneal →
This entry was posted in Biomaterials, by jjneal. Bookmark the permalink.