The development of an ocean fleet that could travel to the Americas provided the Western World with a stream of new and wonderful things. Among them were species never before seen by Europeans. Biologists often accompanyied naval vessels on (pre-satellite) map-making expeditions to new areas to collect, describe and curate what they found. Charles Darwin traveled on a naval vessel, The Beagle, early in his career and found many new species and phenomena.

Darwin traveled to the Galápagos Islands cluster and made an observation that at the time, lacked a good explanation. Each island was home to unique species not found on the other islands, although these unique species were similar in many respects to each other. This observation was later explained by Darwin’s Theory of “The Origin of Species by Means of Natural Selection of the Preservation of Favoured Races in the Struggle for Life”. The evolutionary process that gave rise to Darwin’s observation is called adaptive radiation.

New islands are sites of new unique habitats that rapidly change as new species colonize the island. The new environment provides little competition for the first species that arrive. These first arrivals expand their population and colonize habitats (radiate) that are initially only marginally suitable. Over time, isolated populations will accumulate enough genetic adaptations to each of their new habitats that they diverge into multiple species. In the Galápagos, Darwin observed this pattern, the product of adaptive radiation. Darwin developed a simple mechanism, “Descent with Modification and Natural Selection” that explained not only the patterns he observed in the Galápagos but common patterns observed throughout biology. Darwin’s theory is not only a useful explanation, it also predicts where new insect species will be located. 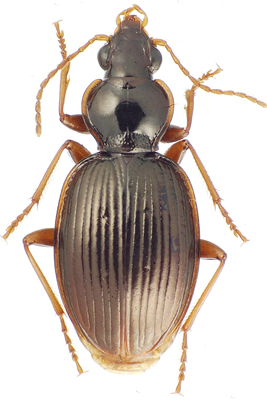 James Liebherr, a Cornell Entomologist, has described many new species in the Genus, Mecyclothorax. Mecyclothorax are ground dwelling predators in a Beetle Family of predators, the Carabidae. The genus likely originated in the Australian area and features an abundant species capable of flight. Over time, many of the flying beetles will be carried off by the wind and perish, but a few will land and colonize new islands. Once on the island, those beetles evolve adaptations to their new location and become new species.

Mecyclothorax species are found on many Pacific Islands and Island chains. Each island contains unique species, the product of adaptive radiation. Entomologists travel to these unique and exotic locations to discover new species, often combining work with pleasure. Liebherr has recently described 14 new species of Mecyclothorax from the Society Islands. Tahiti is a great place to conduct research and a nice destination, especially during the New York winter when most of local insect fauna is inactive.

Jonathan Neal is a retired Associate Professor of Entomology at Purdue University and author of the textbook, Living With Insects (2010). This blog is a forum to communicate about the intersection of insects with people and policy. This is a personal blog. The opinions and materials posted here are those of the author and are in no way connected with those of my employer.
View all posts by jjneal →
This entry was posted in by jjneal, Environment, Taxonomy. Bookmark the permalink.