25,000 – 30,000 bumblebees are dead in the parking lot outside a Target store in Wilsonville, southwest of Portland, Oregon. Conservation biologists are investigating the cause. The preliminary suspects are pesticides or toxic pollen. The species of tree is not native to the United States and some pollens can be toxic to bees. However, massive bee kills have not been noted in the past and the pollen has probably not changed.

Trees in parking lots are sometimes treated for aphids and other phloem feeding insects that drop sticky honeydew on parked cars. In this instance, the trees were treated with the neonicotinoid insecticide, Dinotefuran a few days prior to onset of the bee kill. 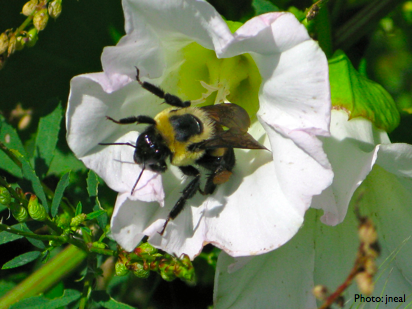 The neonicotinoid insecticides are at the center of a controversy over bee kills. The toxicity to bees is orders of magnitude greater than some of the notable pesticides (such as carbamate insecticides) responsible for bee kills in the last century. Dinotefuran and other neonicotinoids are relatively safe for humans because they are selectively toxic to insects. However, beneficial pollinators such as bumblebees are also insects and can be killed along with the targeted pests. In orchards, growers are not allowed to spray most insecticides during the period when trees are flowering. The same rules should apply to flowering trees.

It brings it home that we’ve got a lot of work to do to learn how to not harm these insects that are critical to our food supply.

Jonathan Neal is a retired Associate Professor of Entomology at Purdue University and author of the textbook, Living With Insects (2010). This blog is a forum to communicate about the intersection of insects with people and policy. This is a personal blog. The opinions and materials posted here are those of the author and are in no way connected with those of my employer.
View all posts by jjneal →
This entry was posted in by jjneal, Environment, News, Pest Management, Policy. Bookmark the permalink.