Alex was surprised that allergic reaction in males was higher than females. In part, this is due to allergic response developing after multiple exposures. Males more often find situations that increase the chances of encounters with stinging insects and thus are stung more frequently.

Jay asks, “how do you find out if you’re allergic to their venom without actually being stung?”

Insect venom can be tested using the same methods used to test other allergens. Most often a skin prick test is used. Blood tests are typically less sensitive, but can be used to test for antibodies to the venom. People with high levels of antibody to a venom are more likely to express an allergic reaction. This brings to mind a story about Jonny Knoxville, aka “Jackass”. Early in his career, Jonny agreed to perform a stunt called “Beekini” that involved smearing his bikini with honey and standing in front of a bee hive. Prior to the stunt, he had a blood test for bee sting allergy. The tests came back positive, but late, just as he was getting ready to do the stunt. He did the stunt anyway, in spite of the risk. The outcome could have been tragic, but fortunately, the stunt was completed without a sting. 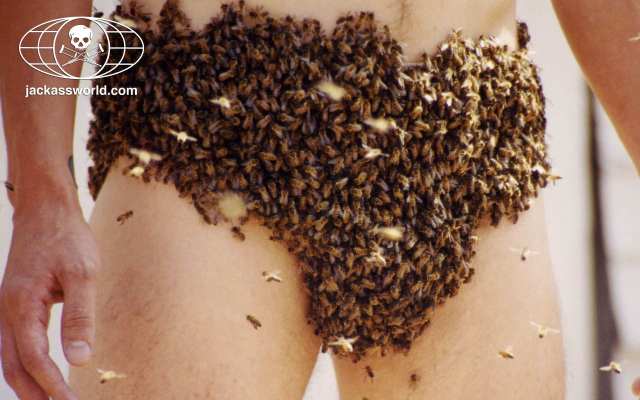 Jonathan Neal is an Associate Professor of Entomology at Purdue University and author of the textbook, Living With Insects (2010). This blog is a forum to communicate about the intersection of insects with people and policy. This is a personal blog. The opinions and materials posted here are those of the author and are in no way connected with those of my employer.
View all posts by jjneal →
This entry was posted in Art, by jjneal, Health. Bookmark the permalink.