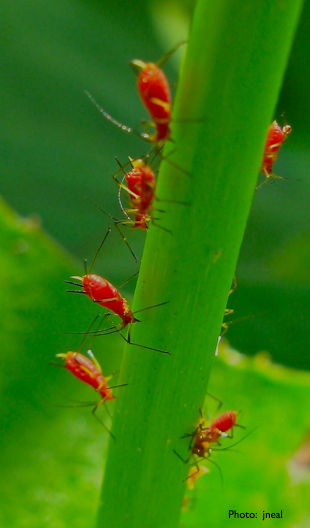 The phloem of plants is an important tissue for transport of nutrients. Phloem transport is an active process within phloem cells. Cutting the phloem immediately triggers a plant response to stop phloem transport. This response is adaptive. It limits loss of fluid in plants that are damaged by herbivore feeding or other biotic or abiotic factors. The shutdown of the phloem created a problem for plant physiologists interested in studying and measuring phloem and its transport. A technique was needed to tap into the phloem without triggering the shutdown mechanism.

J. S. Kennedy & T. E. Mittler wanted to investigate the nutrient content of plant phloem, the food of the aphids they studied. They developed a technique for collecting phloem using aphids. They allowed aphids to settle on a plant and begin feeding on the phloem. The aphid could be quickly decapitated in a manner that would leave the stylets of the aphid firmly implanted in the phloem. The phloem, under pressure from the transport process of the plant, continued to flow from the end of the stylets for several days. J. S. Kennedy & T. E. Mittler first published their technique in a Letter to Nature in 1953* and noted that plant physiologists might find the technique useful. The technique has been refined, modern tools such as lasers are used to cut the aphid stylets, but the basic technique is still in use by plant physiologists today.

Jonathan Neal is a retired Associate Professor of Entomology at Purdue University and author of the textbook, Living With Insects (2010). This blog is a forum to communicate about the intersection of insects with people and policy. This is a personal blog. The opinions and materials posted here are those of the author and are in no way connected with those of my employer.
View all posts by jjneal →
This entry was posted in Biomaterials, by jjneal, Insect Inspired. Bookmark the permalink.

1 Response to Aphids As Surgeons