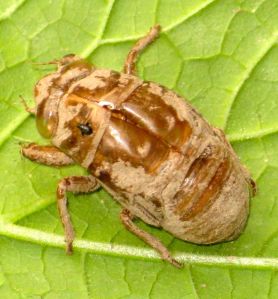 The Cast Skin of a Cicada After It Has Molted. The chitin and protein of the old cuticle, with the exception of this thin layer has been digested.

Molecular tools help us understand insect biology. Recently, it was found that a protein, Knickkopf, is responsible for preserving the new cuticle from degradation during molting. Further study* has identified two additional genes in the Knk (Knickkopf) gene family. Three Knk genes exist in all insects reviewed to date. In addition to protecting the new cuticle from enzymes that degrade the old cuticle during the molt, Knickkopf also has a role in the arrangement of chitin fibers in the cuticle. A laminate arrangement is thought to provide structural resistance to cuticle tearing.

The newly identified proteins act on chitin in other locations such as the ridges that keep trachea from collapsing. The full range of functions performed by Knickkopf proteins is still being explored. Preventing Knickkopf proteins from being produced is detrimental to insects and suggests potential for insect control. New developments are changing how we think about insect cuticle.

Jonathan Neal is an Associate Professor of Entomology at Purdue University and author of the textbook, Living With Insects (2010). This blog is a forum to communicate about the intersection of insects with people and policy. This is a personal blog. The opinions and materials posted here are those of the author and are in no way connected with those of my employer.
View all posts by jjneal →
This entry was posted in Biomaterials, by jjneal, Development. Bookmark the permalink.