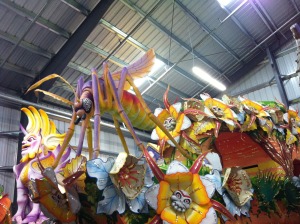 Mosquito Float was part of the 2013 Mardi Gras Celebration in New Orleans, LA

The Zika virus link to microcephaly has set off alarms throughout the Americas. Brazil, the epicenter of Zika in the Americas went from 150 cases of microcephaly to over 4000. This has led the CDC to issue travel alerts, especially for pregnant women. A large commercial airline, Grupo LATAM, is waiving cancellation charges and flight-change fees for pregnant women who had booked flights to areas with Zika virus transmission (Brazil, Colombia, El Salvador, Guatemala, French Guyana, Haiti, Honduras, Martinique, Mexico, Panama, Paraguay, Puerto Rico, Suriname and Venezuela).

Mosquito control is being approached with a renewed sense of urgency. Zika virus can be spread by the yellow fever mosquito, Aedes aegypti. Efforts to reduce Aedes aegypti have successfully reduced yellow fever transmission in the past. In the 1950s, widespread mosquito control programs pushed Aedes aegypti out of many areas of Brazil. Reduced attention to mosquito control allowed the mosquito to recolonize. There is a vaccine for Yellow Fever, but not for Dengue, Chikungunya and Zika which are vectored by the same mosquito. Brazil has an increase in all of these diseases. Serious efforts to control mosquitoes by removing breeding sites and other measures would fight all those diseases at once.

In Brazil, mosquito repellents have flown off the shelves and the price of repellents has drastically increased. Brazil is deploying 220,000 or its military personnel to deliver mosquito repellent to pregnant women. Several cities will fog with insecticides to kill mosquitoes ahead of the Carnival celebrations of February 9 when many will be outside. Public health efforts based on insect biology are as important as ever.

Jonathan Neal is a retired Associate Professor of Entomology at Purdue University and author of the textbook, Living With Insects (2010). This blog is a forum to communicate about the intersection of insects with people and policy. This is a personal blog. The opinions and materials posted here are those of the author and are in no way connected with those of my employer.
View all posts by jjneal →
This entry was posted in by jjneal, Health, News, Pest Management, Policy. Bookmark the permalink.

1 Response to Living With Mosquitoes