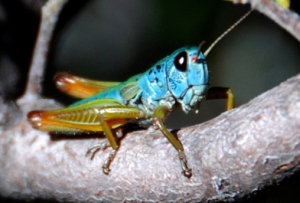 At 25C, the two types of granules separate. The smaller granules move to the apical third of the cell, and the larger granules are in the basal portion of the cell. In this configuration, a portion of the light in the blue wavelengths hits the small granules and is reflected. The reflected light produces a blue color. Other colors of light are scattered and absorbed.

The blue color in Kosciuscola tristis is due to the physical structure and arrangement of the granules and not a pigment. Shifting the arrangement of granules shifts the color. This principal could be used in theory to make synthetic materials that change color.

Jonathan Neal is a retired Associate Professor of Entomology at Purdue University and author of the textbook, Living With Insects (2010). This blog is a forum to communicate about the intersection of insects with people and policy. This is a personal blog. The opinions and materials posted here are those of the author and are in no way connected with those of my employer.
View all posts by jjneal →
This entry was posted in Biomaterials, by jjneal, Environment. Bookmark the permalink.

2 Responses to Living With Chameleon Color