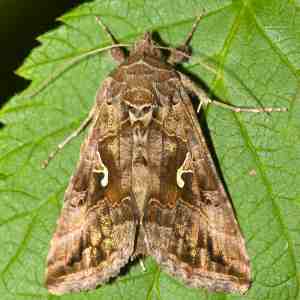 Sports fans want to know, “Why were there so many moths at Euro 2016?” Insect Biologists point to several factors. Many of the moths were Silver Y moths, Autographa gamma, named for the Y-shaped (or gamma-shaped) marking on the wing. These moths are migrants that fly between Europe and North Africa. Two major migration swarms occur: One in spring and one in Summer. Euro 2016 coincided with the 2016 summer migration.  Thus, large swarms of moths were in the area.

Many moths, including the Silver Y, are inactive during the day. At daylight on game day, moths trapped inside the stadium settled onto the field and into the seats waiting for cover of darkness to resume their migration. Their rest was disturbed by fans entering the stadium and athletes running on the pitch. Thus the spectacle of moths flying around adding a special ambiance to the match.

Jonathan Neal is an Associate Professor of Entomology at Purdue University and author of the textbook, Living With Insects (2010). This blog is a forum to communicate about the intersection of insects with people and policy. This is a personal blog. The opinions and materials posted here are those of the author and are in no way connected with those of my employer.
View all posts by jjneal →
This entry was posted in behavior, by jjneal, Sports. Bookmark the permalink.