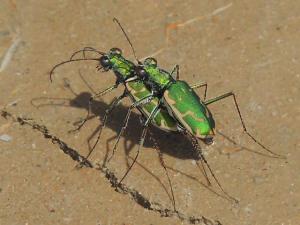 Tiger beetle elytra cover the hearing detectors and block the sound when running along the ground.   In flight, the elytra are raised exposing the detectors to bat sonar. When bat sounds are broadcast, the beetles alter their flight mechanics, a bat avoidance response. The beetles also generate a “clicking” sound which may have defensive properties of confusing the bat or disrupting its sonar.

Jonathan Neal is an Associate Professor of Entomology at Purdue University and author of the textbook, Living With Insects (2010). This blog is a forum to communicate about the intersection of insects with people and policy. This is a personal blog. The opinions and materials posted here are those of the author and are in no way connected with those of my employer.
View all posts by jjneal →
This entry was posted in behavior, by jjneal, Environment, Taxonomy. Bookmark the permalink.