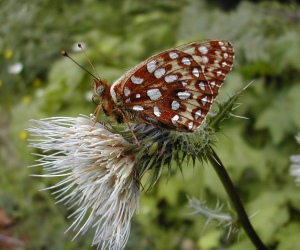 The Oregon Silverspot Butterfly is a threatened species that lives in disturbed habitats along the coasts of California and Oregon. It has been sighted in Washington in the past but not recently. It has been reduced from 20 locations to only 5 primarily due to human induced loss of habitat.

The U.S. Fish and Wildlife Service (USFWS), in partnership with the State of Oregon Parks and Recreation Department plans to establish new populations of the butterfly at sites within its historic range. The new populations will be established by releases from a captive breeding program used to sustain the butterfly in its current habitat. Expanding populations to new areas will increase access to host plants such as hookedspur violet and serve as a buffer against catastrophic loss of existing habitats. Ongoing commercial activities that are not permitted in existing areas will be allowed in new locations.

Jonathan Neal is a retired Associate Professor of Entomology at Purdue University and author of the textbook, Living With Insects (2010). This blog is a forum to communicate about the intersection of insects with people and policy. This is a personal blog. The opinions and materials posted here are those of the author and are in no way connected with those of my employer.
View all posts by jjneal →
This entry was posted in by jjneal, Endangered Species. Bookmark the permalink.