Living With The Golden Sun Moth 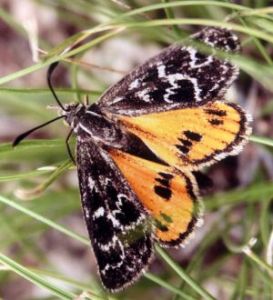 The Golden Sun Moth has beautiful yellow hind wings that resemble a “golden sun”. This moth is threatened due to development and fragmentation of its grassland habitat. Unlike most Lepidoptera, the Golden Sun Moth feeds on the roots of grasses. Its natural habitat is grasslands in Australia that are grazed by Wallabies.

In the Canberra, Australia area, a planned building by the Bangladesh High Commission was delayed because the Golden Sun Moth was found on the site. The site is being evaluated in further detail to determine if the construction would harm the moth populations. The Canberra building plan sites foreign embassies in this area which happens to be habitat for the Golden Sun Moth. The moth may force a change in plans as diplomacy gets trumped by conservation.

Jonathan Neal is a retired Associate Professor of Entomology at Purdue University and author of the textbook, Living With Insects (2010). This blog is a forum to communicate about the intersection of insects with people and policy. This is a personal blog. The opinions and materials posted here are those of the author and are in no way connected with those of my employer.
View all posts by jjneal →
This entry was posted in by jjneal, Endangered Species. Bookmark the permalink.

1 Response to Living With The Golden Sun Moth