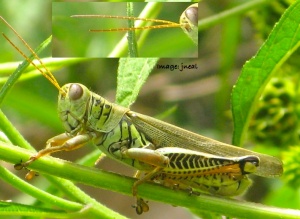 Consuming insects is unavoidable because insects contaminate many food items.   Even under the careful eye of the home gardener, Drosophila flies will lay eggs on ripening tomatoes.  These eggs often hatch before the tomato is eaten and tiny Drosophila larvae are invariably consumed.  It is not practical to grow tomatoes and exclude insects (How would they be pollinated?).   People have been eating home grown tomatoes for centuries and the insects are mostly unnoticed and ignored.

If ripe tomatoes are split and crawling with large numbers of large Drosophila larvae the tomatoes are usually discarded.  The standard accepted practice is to ignore small numbers of rarely noticed small larvae but reject produce with noticeable size and  numbers.  This standard is met by regulations for processed tomatoes in the US.  The U.S. Food and Drug Administration (FDA), recognizes the impossibility of excluding all insects and insect parts from foods. Instead the FDA regulates the maximum level of insects and insect parts in commercially sold food.

The FDA demands that food be prepared under sanitary conditions and excessive insect parts in commercial foods is interpreted as evidence of unsanitary food preparation conditions. The U.S. FDA publishes “Food Action Defect Levels” and will recall food that exceeds those limits. Small amounts of insects and insect parts in food below the FADL are not considered harmful.

Companies that process and market food to the public typically take measures to keep insects contamination far below the FDA standards.  A violation could generate negative press that could reduce sales and profits.  Consumers sometimes file lawsuits when they find insect contamination in processed foods.  For example, a grasshopper the size of a green bean may not be mechanically excluded from the processing.  A consumer who found a grasshopper in a can of beans sued the company.  Consumer dissatisfaction motivates the food processing industry to exclude insect contamination levels that might comet to the attention of consumers.

Jonathan Neal is a retired Associate Professor of Entomology at Purdue University and author of the textbook, Living With Insects (2010). This blog is a forum to communicate about the intersection of insects with people and policy. This is a personal blog. The opinions and materials posted here are those of the author and are in no way connected with those of my employer.
View all posts by jjneal →
This entry was posted in by jjneal, Food, Policy. Bookmark the permalink.